Players hoping to get drafted train for not only months, but years, in preparation for their draft year. Their year to get noticed. Their year to impress. Their year to hopefully have their name called out on draft night.

So when Jy Simpkin had his draft year taken away from him, just as it was getting started whilst playing for his school’s side at Scotch College – he could be forgiven for feeling shattered, angry, numb or perhaps all of the above.

Simpkin is an exciting, skilful, quick forward/on-baller who is hoping to find a home at an AFL club come the 25th November on AFL Draft night in Sydney. 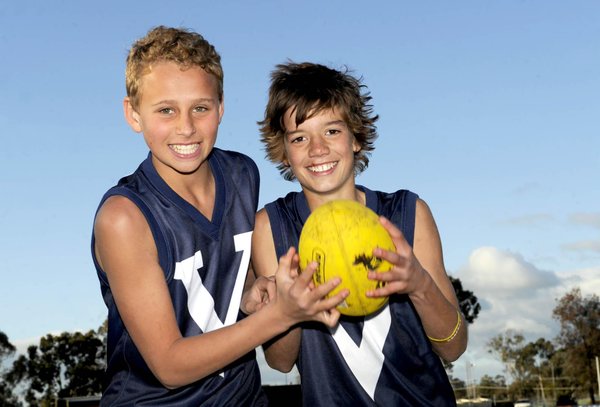 He was just beginning his draft year (the year he had been waiting for since representing Victoria at Under 12 level), when he laid a tackle on an opponent.

“I knew I did something straight away, the pain was excruciating. I heard it snap” Simpkin revealed.

Simpkin first caught the eye of recruiters following a strong Under 16 carnival playing for Victoria Country in 2014 on the Gold Coast. From there he was selected to play for TAC Cup side, Murray Bushrangers at the tender age of 16, playing against boys as old as 19, who too, were vying to be drafted that year.

Simpkin explained, “It was a great opportunity to be running along side the likes of Dan Howe (Hawthorn) Nathan Drummond (Richmond) as a 16 year old. We played some against some pretty awesome players also like Christian Petracca (Melbourne) and Angus Brayshaw (Melbourne). This gave me the first taste of what was to come for the next couple of years."

He went on to play the finals series with the Bushrangers that year, where they were knocked out in the in the first elimination final against the Sandringham Dragons.

Following that strong year, Simpkin made the big decision to move down to attend boarding school at Melbourne’s Scotch College for his final two schooling years, a move that he hoped would benefit not only his football – where he could play in the prestigious APS Competition in front of watchful recruiters – but also his academic studies.

“Being given the opportunity to go to such a highly rated school such as Scotch College, was an opportunity of a life time. To be able to experience the boarding life, to get the most out of my academics and to play in the strong APS competition is something I'm very grateful for and will remember for the rest of my life.” 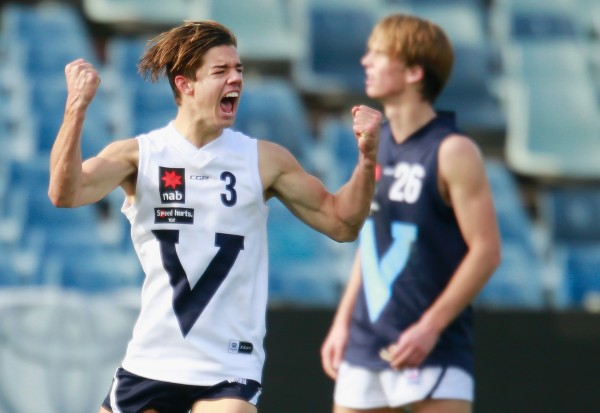 Featured: Murray Bushranger, Jy Simpkin reaction after centring kick at the top of the goal square with just seconds on the clock. Source: SportsTG/TAC Cup

This year proved to be a big one for Simpkin as he not only had to deal with moving to a new city, a new school, meeting new people and an increased academic workload, but he also was again selected to represent Victoria Country at the under 18 National Championships, this time as a bottom ager. Playing alongside current AFL players, including Jacob Weitering (Carlton), Darcy Parish (Essendon) and Rhys Mathieson (Brisbane Lions), Simpkin helped Victoria Country win the title kicking eight goals in six games, including the match-winning goal after the siren to give his side a vital victory against traditional rivals, Victoria Metro. 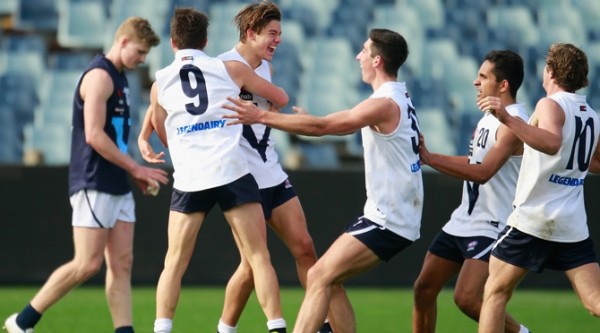 “Playing along side those guns who were in that team, was a learning tool not many other kids get when trying to prepare for their draft year. Watching how Jacob Weitering went about his football on and off the field was something that everyone notices with his leadership. To be able to play with them in an undefeated carnival wearing the Big V was a real eye opener to what level I had to train myself to, to be able to be drafted and follow their footsteps.”

As a reward for his stellar season, the 181cm, 81kg prospect was added to the AFL Academy where he was able to feed off and get advice off experienced coaches including Brenton Sanderson, Glenn Jackovich and Brad Johnson, as well as current AFL stars Jarryd Roughead and Patrick Dangerfield. The Academy also travelled to America through the pre-season to train under a high performance regime under the watchful eye of recruiters.

“Being added to the AFL Academy was a good reward after working extremely hard in the pre season to be able to play to a level to give myself an opportunity to allow myself to be in such a great environment. Going to America for two and a half weeks training and training pushing ourselves to the limit and learning from all the coaching staff put myself and all the other academy members in a very good stead going into the season.”

Simpkin started his 2016 campaign in fine fashion with a four-goal performance against the Bendigo Pioneers in Round 1 of the TAC Cup season. He then returned to play for his school football side, Scotch College where he broke his leg requiring two bouts of surgery and cutting his 2016 short before it could really get going.

“It’s one of those unlucky injuries I guess, you go out there and lay tackles every game and this one has unfortunately resulted in an injury.”

However, the determined 18 year old from Mooroopna has not let the injury bring him down and has instead looked to bring out the positives and get something out of the season still.

“Obviously I’m guttered not to be able to get out there this year but this gives me a chance to do my rehab well and show how committed I am to everyone” he said.

Through the AFL Academy together with the Murray Bushrangers, Simpkin has been fortunate enough to have access to Richmond’s facilities throughout the year. This varies from using their ice baths to getting treatment from trainers as well as having the opportunity to see the club’s VFL physiotherapist in order to enhance his recovery and rehabilitation.

“Even though I wasn't able to train and be out on the track with the Richmond guys, it was awesome to still be allowed to go use their facilities to help my strength in the gym, physio work on my leg with massages and to also be able to do recovery with ice baths helped fast track my recovery to get myself back as soon as possible.”

“The desire of making an AFL list next year gives me the motivation to work hard and get over my injury to prove to everyone how strong I am internally to be able to get over a big injury and to be able to get back and be better then I ever have.” 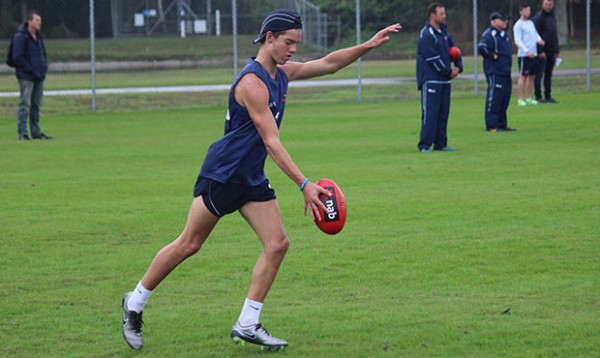 "My family have been great with helping me through all the hard times throughout the year with being away and being at boarding school. They helped make sure I was okay and that I got through the tough times, so I owe them a lot."

And with an attitude like that, there appears no doubt that Simpkin has a big future ahead of him.

Sam is an Arts/Law student at Deakin University majoring in Journalism. He has a keen interest in all sports and hopes he can one day combine his love of writing with his passion for sport in the Sport Journalism field.