This is the RM News post-awards report wrapping up a night full of expectation, preparation, intoxication and sensation!

Admittedly, when this topic fell on my desk mid-Monday afternoon, the excitement was real! With a touch of history (the award and tradition), a bit of comedy (presenters/guests) and a dash of tragedy (not everyone will go home with a medal) – it had the making of a Shakespeare Masterpiece (haha)… so let’s take the up-worthy angle and celebrate the goodness of this event!

J'Aton, Oglia-Loro, Jane Hall, Lillian Khallouf, Georiga Young, Cappellazzo Couture, Stephanie Chehade, Jason Grech – if you are thinking this is the guestlist for Australian Fashion Week… you are wrong!

Many exclusive fashion houses had the opportunity of dressing elite female athletes, the partners (a.k.a WAGs) of AFL players and female/male industry associates… AND they didn’t disappoint!

In what is one of Australia’s biggest sporting industry award nights, the Swisse Brownlow Red Carpet is an event in itself! As the guests of this prestigious event embarked on this year's famous red carpet in jumpsuits, embellished gowns and sleek tuxedos… 2016 unveiled a fashion direction, which was refreshing and edgy! 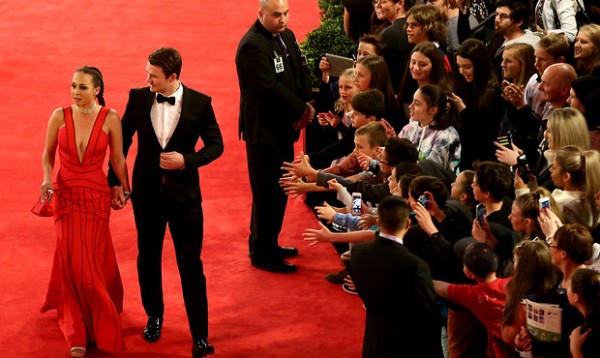 What is the Brownlow Medal?

The Brownlow Medal was named in honour of the late Charles Brownlow, hence the fond use of the term “Charlie”. First awarded under the Victorian Football League (VFL), and then eventually this award transitioned to the Australian Football League (AFL). Mr Brownlow's legacy includes tales of courage, integrity and leadership, as his career included a career as a Geelong Football Club player and club secretary, chairman of the Australian Football Council and the VFL President. An ‘old chum’ of Mr. Brownlow once reported,

“...his influence always being for the betterment of the game whose interests he ably served.”

Technically, the annual allocation of the Brownlow Medal honours the decision-making of the officiating field umpires at the conclusion of each match; therefore, we are celebrating the votes collated per game by AFL umpires! Who would have thought? I guess no matter how much you argue, what the umpires say, really does go!

Undeniably, it is the highest and most decorated award presented to any individual player in the Australian rules football code.

The winners on-field and off-field (highlights)

Mardi Dangerfield wore a striking red panelled gown by designer Georgia Young. She was basking in the limelight, as the votes kept polling for her husband (and honestly, who wouldn't be proud?!). Dangerfield’s speech was well executed with relevance and sincerity – modestly humble, he fittingly attributed his career to the his former team at Adelaide Football Club and a dedication to the late Paul Couch (a former Geelong player and fellow Brownlow Medallist), which created a feeling of nostalgia!

Jesinta Campbell wore a solid black Stephanie Chehade jumpsuit, with thigh-high slits and a plunging neckline…. It was an absolute show stopper! Ticking so many boxes in the fashion stakes, including wearing the coveted Bvlgari's Serpenti range! Jesinta Campbell is the fiancé of Sydney Swans superstar, Lance ‘Buddy’ Franklin. 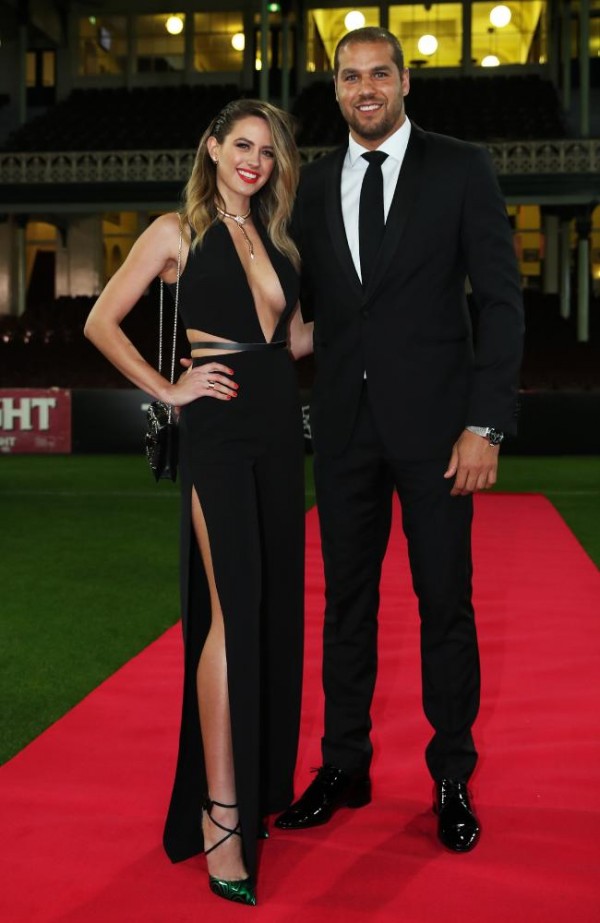 Jessica Todd wore a gown by Georgia Young and was a standout in the gracefully stunning off-the-shoulder design. Partner to Melbourne Football Club ruckman, Max Gawn.

Dani Shreeve wore a sleek One Day Bridal gown, which embodied glamour, sophistication and glitz. The sparkle on her dress had me at first glimmer. Partner to Hawthorn footballer Jack Gunston.

Annie Nolan dressed strategically and wore a beautifully tailored Carl Narve tuxedo, to match her husband's tuxedo (Western Bulldogs player, Luke Picken). However, it was the message behind this bold statement, which was music to my ears… stop the fashion police, online bullying and sexism thrown towards the women walking the red carpet! Well said Annie - so much respect to her for utilising the media to create positive influence! 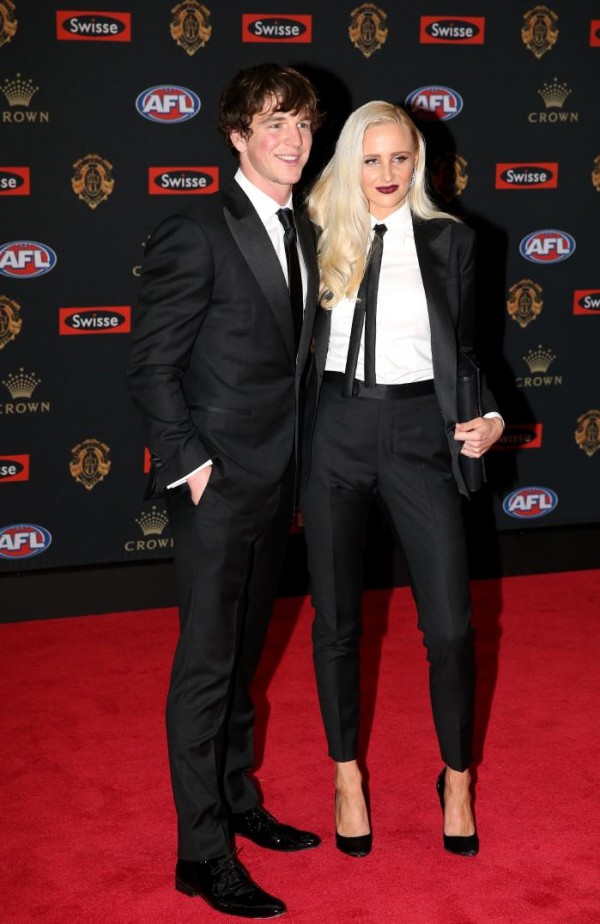 Goal of the Year:

Adelaide Football Club’s small-forward, Eddie Betts was the deserving winner. Betts is in familiar territory as he has kicked numerous awe-inspiring goals, having twice won Goal of the Year (2006 and 2015). The win was made even more exciting as the "wonder goal" was kicked in the AFL's Indigenous Round.

Mark of the year:

"You're going to drop marks … I only saw it live, I didn't watch the replay, but that was almost the best mark I've ever seen. He can do incredible things and we'll just keep working with him...  We've got confidence in him."

- Brad Scott, as featured on afl.com.au

Rookie Me’s very own Head of Sponsorship and Partnership, Ben ‘Dicko’ Dixon brought a combination of humour and quick wit to the red carpet for Fox Footy. 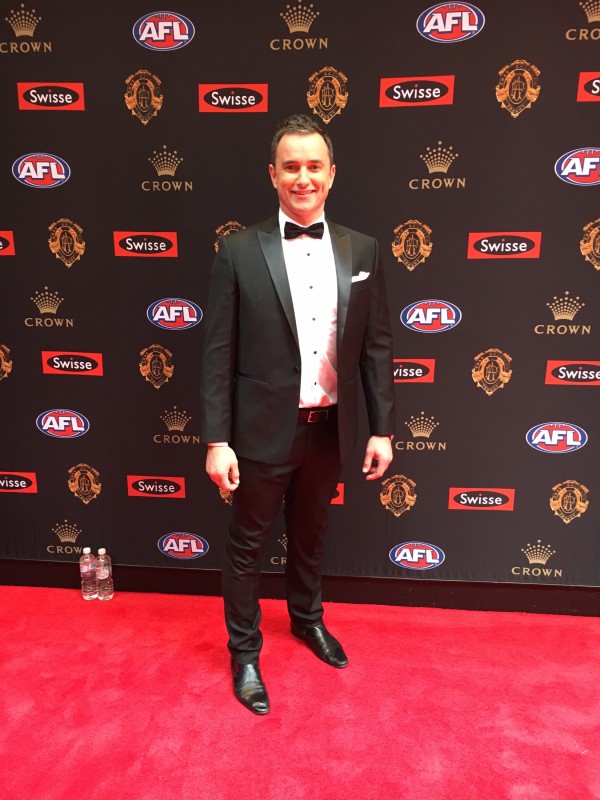 Retired Essendon Footballer, Adam Cooney (also a past Brownlow Medallist winner) and Max Gawn offered light entertainment through the Brownlow count… and they had many viewers chuckling at their antics and facial expressions!

To: the nameless security guard, who was hired to protect the "votes" for the night... job well done! In usual form, Twitter enthusiasts didn't miss a beat when the Armaguard representative graced the Brownlow Medal awards night (and not for the first time). His cameo appearance caused a stir and I believe, that it is safe to say that no-one in their right mind was game enough, to cause a security threat to the sanctity of the umpire's final decision.

Forget the WAGs, no one has done more "preparation" for tonight's Brownlow than the security guard protecting the votes #gunshow pic.twitter.com/cGBQ8uh8Kj

So that's a wrap for the AFL's night of all nights and now... bring on the 2016 Toyota AFL Grand Final! Who do you think will bring home the flag?